by Jeff Campagna
5 November 2013
Two entirely different ways of life are crashing into each other in Morocco’s former international city. Sometimes the crash is beautiful.
Tangier is about as comfortably polarised as a city can be. The glimmering ville nouvelle is mere steps away from the crumbling ancient medina. Faithful Muslims and bon vivants each going to their respective houses of worship. The prayer and the hash. The hijabs and the knock-off Guess jeans. The pack mules and the Range Rovers. Calls in French, answers in Arabic. A spit-shined Tangier for the king to see and the real Tangier for everyone else. It’s the knot in the tug-of-war rope between Africa’s old world sensibilities and Europe’s joie de vivre. It’s a diesel-spurting, salt-water contradiction. And it’s perfect. Everywhere you go you can feel the dissonance and if you don’t watch you’re step, you can fall in the chasm. But there is a small hideaway in the city where two worlds get sucked into one.

It’s my first night in Tangier. I am only visiting because of Anthony Bourdain’s episode of No Reservations (inevitably, I fail in recreating even the smallest portion of his experience. Majun, as it turns out, is actually incredibly hard to find. But I’m in for something even better). After driving through the tangled, old city streets with my host and new friend Hicham, a local architect and a fan of The Doors, we arrive at the Palais de Justice; a slowly deteriorating plaza in the southern nook of the Tangier Kasbah where children play street soccer, locals help park cars for spare change and benign lunatics linger with glassy expressions that scare off tourists.
In the south-east corner of the plaza I notice a small open door. From it wafts scents of mint tea and the sounds of a live Andalusian jam-session. Everything about it seems like a private little event. Like the kind of un-touristy place tourists only wish they could go. But it’s not private at all. In fact, it’s probably one of the most open-to-anyone joints in the city (a city where many cafés are still ‘male-oriented’). The place is called Les Fils du Détroit and, as Hicham informs me, it’s precisely where we’re going. Les Fils du Détroit means The Sons of the Strait referring to the Strait of Gibraltar upon which Tangier is so strategically perched. 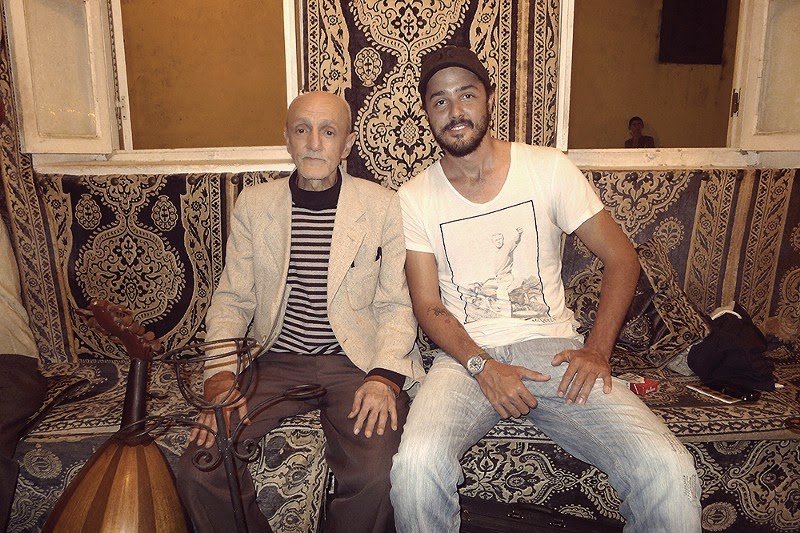 Les Fils du Détroit is a closet-sized, rectangular room with one door, three windows, wrap-around bench seating on three sides covered in ornate carpeting, a small, tiled nook with a gas burner for making mint tea and purpose-built, vertical cast-iron mint tea and ashtray holders sticking out of the floor. There are long-retired instruments hanging from the ceiling along the walls. The walls are also covered in ornate carpeting. And various pieces of writing, faded old artworks and historical photos adorn the carpeted walls in no apparent order.

On one side of the bench are a few old men playing derbouga drums, violins, cellos and some other exotic instruments I don’t recognize. They have kif pipes tucked behind their backs and voices like haggard old angels. Across from them sit a string of young Moroccans with tight, hip clothing, fancy shoes, bomber jackets and bright, smooth faces like silk. Everybody is singing in Arabic. They are in the middle of an epic 26-minute piece of music that puts In-A-Gadda-Da-Vida to shame (I find out later that this particular song can actually go on for two or three hours). Beautiful young girls sway from side-to-side, clapping their hands and snapping Instagrams with their super-smartphones. The young and the old in complete harmony. Usually when really old people hang out with really young people, it can get awkward. Not here. Not now. There seems to exist some telepathic short-hand amongst them as they musically navigate the traditional tunes. Everybody is drinking mint tea. They are smiling and laughing and swaying in unison like a scene from Sister Act. Seriously, the happiness-per-capita in this room is off the fucking charts. 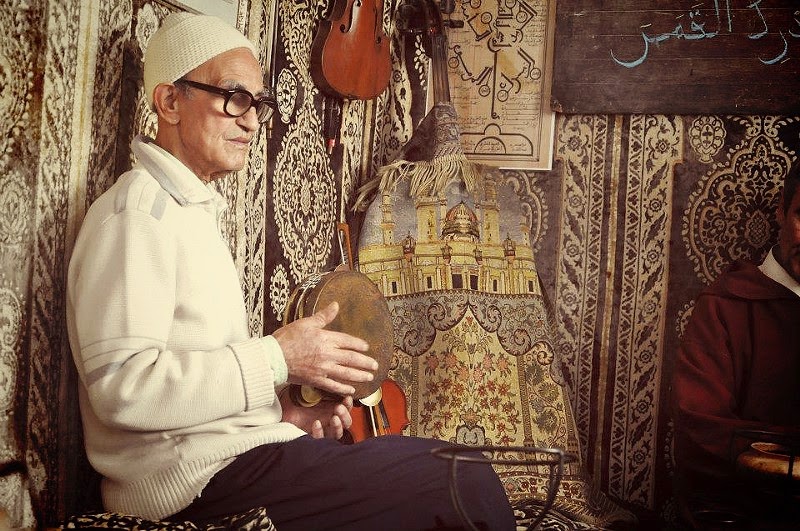 Abdelmajid El Moueddien is one of the haggard old angels. He is an unassuming bag of bones with bright eyes like fireballs. Abdelmajid dresses exactly like your grandfather. He speaks Arabic, French and Spanish. He plays an oud: a 12-string, pear-shaped wooden instrument with no frets and a head that is bent backwards at a 45 degree angle. It is a grandfather to the guitar and a brother to the lute. Abdelmajid plays the oud as though he’s been doing it for almost seventy years. And he has. When he tunes his oud, he cranes his neck forward and places his left ear on the large wooden body of the instrument. He can also play the cello. Abdelmajid is the unpretentious, hands-on, head-honcho of Les Fils du Détroit.
Hicham tells Abdelmajid that I am a journalist and that I’d like to ask him a few questions. I start with boring background stuff like, ‘What was this room used for before?‘, ‘Whose idea was it?‘ and ‘How old is Les Fils du Détroit?‘. He replies in Arabic: ‘Do you want to write about the walls, or the music?‘. Abdelmajid used to work in government administration before leaving it behind to start his magical, little music box almost thirty years ago. But he certainly didn’t do it for the money. Les Fils du Détroit is not a profit-generating establishment. You don’t have to pay to get in. You pay $2 for mint tea (though it’s brought to you automatically). And you can buy their CD for $10 on the way out (I did). 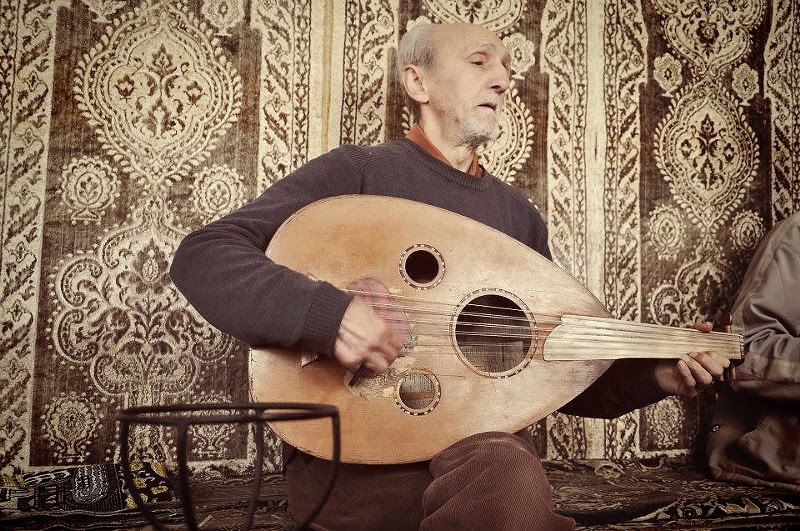 Every night, a variety of local musicians stroll in to play a few tunes and jam, but there are five old-timers that are almost always here. The house band if you will. There’s Hassam, a retired seaman who plays a derbouga drum; Laarbe who plays the tambourine, sports massive horn-rimmed glasses and has a voice like Donald Duck in the most bad-ass way possible; Driss, a retired cab driver who plays violin; Abdelkader, who used to own a watch shop, on the flute and violin; and finally, Abdelmajid on the oud. Watching these golden-agers smoke and laugh and perform the ancient melodies of their ancestors gives me the distinct feeling as though I am witnessing Morocco’s very own version of The Buena Vista Social Club at work. When I realise this, I dawn a Sister Act grin. 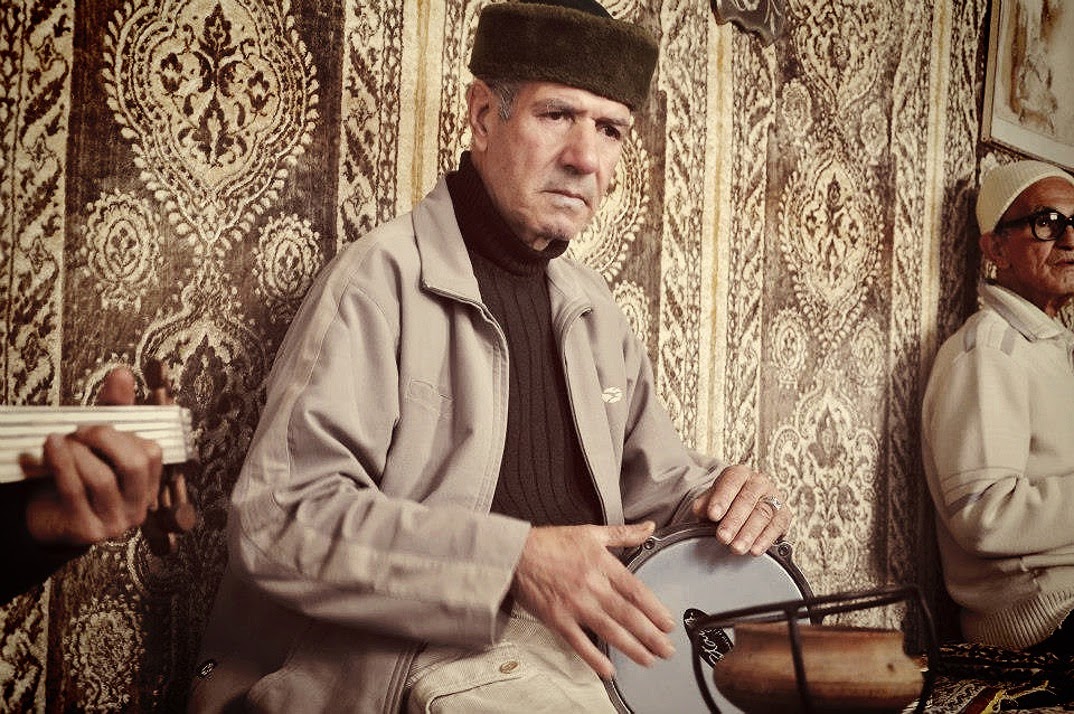 But what I find most interesting about Les Fils du Détroit is the harmonious collision of two worlds in a 15m2 shoebox. Two entirely different perspectives on life and liberty. The past sitting on one side and the future sitting on the other. In between them sits a world war, a cold war, three kings, the battle for Western Sahara, an ambiguous international association, failed coups d’état, international summits and cancelled elections, the internet and skinny jeans. But these things cower before the importance of tradition, harmony and a sloppily tuned oud. Each note forces the invisible retreat of all the shit that makes the young and the old unable to relate to one another.

The current King of Morocco, Mohamed VI, is busy trying to turn Tangier into the Monaco of Africa with a world-class casino, a landmark marina, a rejuvenated waterfront corniche and even a film industry-friendly philosophy. And as The Future creeps into Tangier like a thick fog, the apprehension among local traditionalists is palpable. Although they don’t say it, and may not even admit to it, I can tell these beautiful, worn-out old minstrels feel a sense of reassurance, as they sing along with the Generation-Y’ers, that the melodies of their forefathers will live on, even if only for a little while longer.

Maybe it is because the music isn’t being forced through the all-ruining commercial meat grinder of modern pop music. Maybe it’s the way the sounds wafted out the door and across the ancient Palais de Justice at dusk as I arrived. Or maybe it’s just the hash I smoked. Whatever the case, this little box just feels like the rightest place on our shit-spinning pale blue dot. Les Fils du Détroit: the world’s coolest, most polarity-crushing jam-session.